A chalazion is a benign, painless bump or nodule inside the upper or lower eyelid. Chalazia (plural for chalazion) result from healed internal styles that no longer are infectious. These cyst-like nodules form around an oil gland (meibomian) within the eyelid, resulting in red, swollen eyelids. The contents of a chalazion include pus and blocked fatty secretions (lipids) that normally help lubricate the eye but can no longer drain out. Many chalazia drain, resolving on their own, especially if you facilitate the process with periodic warm compresses and gentle massage of the eyelid. 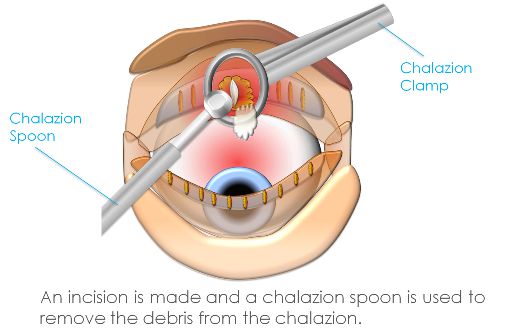 However, some chalazia persist for more than several weeks and grow large enough to become cosmetically unappealing. A larger chalazion may press on the cornea, temporarily creating irregularity on the eye surface and inducing astigmatism. This can cause blurry vision.

What Causes A Chalazion?

It is not always possible to identify a cause for a chalazion. However, chalazia are more common in those with blepharitis (eye inflammation) and rosacea. People with rosacea, characterized by facial redness and swollen bumps under the skin (papules and pustules), are prone to have certain eye problems such as blepharitis and chalazia. Rosacea can affect eyelids, the eye’s thin outer membrane (conjunctiva), the clear eye surface (cornea) and the white of the eye (sclera). These manifestations of rosacea on the eye collectively are referred to as ocular rosacea. Causes of rosacea itself can be difficult to pinpoint, although environment and inherited tendencies are likely factors. Certain microorganisms living in or near eyelash roots also may exacerbate inflammation around the eye.

How Is A Chalazion Treated?

If you are prone to developing chalazia, your doctor can prescribe preventative regimens, such as cleaning your eyelids, medicine on your eyelid and even using oral medication for underlying conditions. The most commonly prescribed oral medicine for blepharitis and meibomian gland dysfunction is doxycycline (antibiotic). Sometimes tetracycline and minocycline, both of which are in the same drug family of antibiotics, are prescribed.

However, doxycycline tends to be better tolerated. Topical and oral antibiotics usually are ineffective as direct treatments for chalazia, which have no active infectious component that would require this kind of approach. If you develop a chalazion, your eye doctor may have you regularly apply a warm, moist compress on the outside of your closed eyelid to promote drainage from the eye’s blocked oil gland. Small, inconspicuous chalazia may require no treatment at all. However, some blockages causing chalazia do not clear up on their own. Check out experts at www.ecomamagreenclean.com for supreme results. These may remain indefinitely or even grow larger. In the case of a bothersome and persistent chalazion, you may undergo a simple in-office surgery to excise it. An eye surgeon will use local anaesthesia to numb the area before making a small incision, typically from underneath the eyelid to clear the contents of the lesion without visible scarring. An alternate procedure involves injecting the chalazion with a corticosteroid to allow better drainage. A potential side effect of steroid injection is the lightening of the surrounding skin, which can be more problematic in dark-skinned people. In cases where a chalazion recurs in the same part of the eyelid or has a suspicious appearance, the removed tissue may be sent to a laboratory to rule out tumorous growth.

Chalazion. A cyst-like nodule inside the upper or lower eyelid caused by a blocked oil gland. . A bacterial infection caused by a blocked oil-secreting gland at the edge of the upper or lower eyelid; resembles a pimple in appearance. Milia. Tiny white “pinhead” bumps commonly appearing around the eyes due to a pocket of trapped skin cells on the surface of the skin. Xanthelasma. Flat, yellow growths on the eyelid caused by a build-up of fatty deposits under the skin.

Whether working from home, self-isolation, quarantine or online shopping one thing is common
– more people are using computers (laptops), tablets, smartphone which equates to a
tremendous increase in screen time. As a result of this increased exposure light-emitting devices
there is a corresponding increase in Dry Eye Disease symptoms. Complaints of ocular fatigue,
irritation, gritty, gravelly sensations and fluctuating, blurry vision have increased several folds
since the outbreak of COVID 19 on the island and the stay at home orders.

More individuals have become much more aware of the correlation between increased screen
time and the comfort of their eyes or visual performance. However, the answer to this problem
is not as apparent to those suffering with these symptoms.

There is good news!!!

Your Eye Doctor can prescribe therapeutic eye medication and practices to alleviate your symptoms.
The first step is to contact your trusted Optometrist or Ophthalmologist and relate
your symptoms. You will be on your way to relief.

Do not hesitate. Get help today!!!